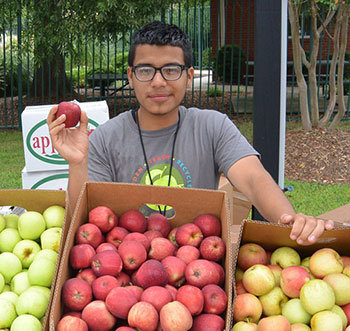 When we last met the three-season Youthmarket alum Danny, we heard about how working at the market has boosted his perseverance, his patience, and his interest in nutrition—which gave us an idea. Would Danny be up for keeping a week-long food diary?

Below is the result, and we’ve gotta say, it’s pretty awesome to see so many fruits and veggies in a teenager’s diet. What’s even cooler is that Danny assures us he didn’t eat healthy just to look good. “I don't believe keeping a diary affected what I ate last week,” he says. “I stayed truthful to my regular eating habits and enjoyed my week by eating what I was offered, if I found it appetizing.” We believe it. That papa a la huancaína and chicha morada (Peruvian potatoes in cream and purple corn drink) sound pretty good to us, too.

Even so, Danny’s his own harshest critic. “I do believe I should lower down the non-healthy snacks and meals, such as chips and greasy foods, because it will be harder later on, if it really becomes a habit for me.”

Yep. We knew we liked him. Check out Danny's week-long food diary.